THE PERFORMANCE WAS CONCEIVED BY ARTIST FERRUCCIO ASCARI ON THE OCCASION OF THE 50th ANNIVERSARY OF THE MASSACRE OF PIAZZA FONTANA (12 DECEMBER 1969), “MOTHER” OF ALL THOSE MASSACRES THAT FOLLOWED, LEAVING A LEGACY OF BLOOD SPILLED IN OUR COUNTRY INCLUDING: 1970 TRAIN FRECCIA DEL SUD; 1972 PETEANO; 1973 MILAN, POLICE HEADQUARTERS; 1974 TRAIN ITALICUS; 1974 PIAZZA DELLA LOGGIA, BRESCIA; 1976 PIAZZALE ARNALDO, BRESCIA; 1980 BOLOGNA STATION.
IN NO MORE THAN THIRTY MINUTES, THE PERFOMANCE REVIEWS ALL THESE EVENTS. IT IS A JOURNEY THROUGH TIME AND MEMORY, SEEING ON STAGE SEVENTEEN PERFORMERS, NUMBERING THOSE VICTIMS OF PIAZZA FONTANA PLUS ONE: THE ANARCHIST PINO PINELLI. A SEQUENCE OF TEN PAINTINGS REFERS TO THE MASSACRES, USING IMAGES TAKEN IMMEDIATELY AFTER THE EVENTS: THROUGH WHICH THE VICTIMS EFFECTIVELY “COME BACK TO LIFE” DESCRIBING THOSE EVENTS THROUGH IMAGES PROJECTED ON TO THEIR BODIES – BECOMING TO ALL ENDS AND PURPOSES MOVING SCREENS.

The founding element of this work, as in other performances by Ferruccio Ascari, is the interaction between different levels of language through a dense web of relationships between body movement, light, sound and space. The visual elements are interwound with the suggestion of vocal emissions and the sound track produced by the artist himself.

The performance entitled chi è Stato? asks a question that is still relevant: who the key figures behind those massacres are, has not yet been widely understood. Many have gone unpunished, in the shadows and the victims still await justice. This passed time risks erasing memories related to this tragic phase in the history of our country.

The performance is part of a broader project which the Non Dimenticarmi Committee, an expression of the public at large, intends to pursue: the construction in Milan of the monument designed by Ferruccio Ascari in order to bring these facts out of the shadows and return them to an active reminder that casts light on those events. With the Municipality of Milan, which welcomed the project, the Committee is in dialogue in order to identify an appropriate place for its permanent location.
The Committee, composed of lay persons and with the support of ANPI, ACLI, the Archdiocese of Milan, as well as the Associations of the Relatives of the victims of the massacres of Milan, Brescia and Bologna, continues its information and self-financing campaign for the construction of a monument that it intends to donate to the City. 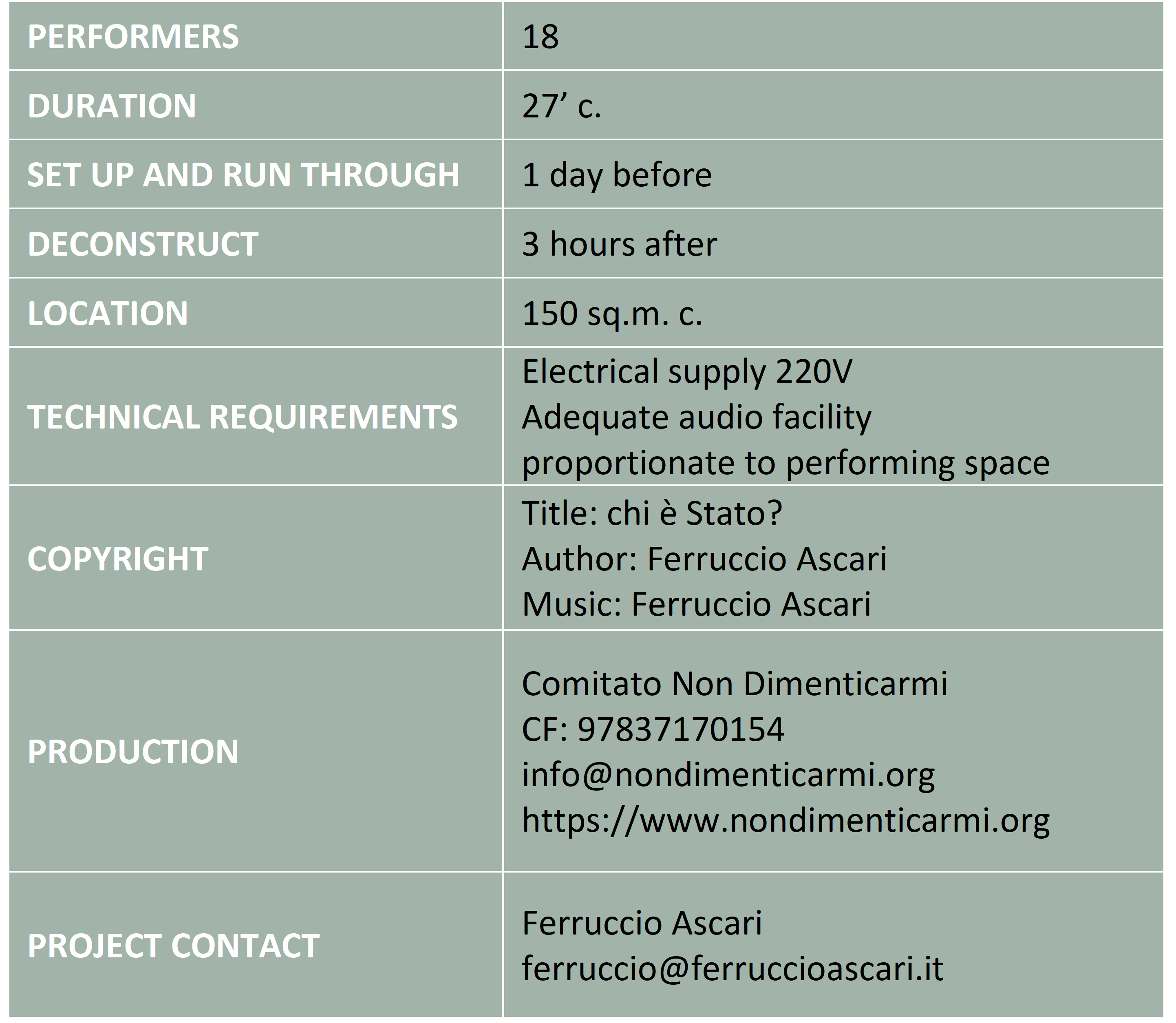